The environmental organizations- Alabama Rivers Alliance, Black Warrior Riverkeeper, Coosa Riverkeeper, and Mobile Baykeeper developed these maps to show the threat coal ash poses to our groundwater, rivers, wildlife, economies, and health. Across the state six coal ash dumps are slated to be capped-in-place. Cap-in-place covers the ash pit on top but still leaves it unlined on the bottom, allowing groundwater pollution to continue.

“These maps clearly illustrate why we can’t leave coal ash in unlined pits next to our lakes and rivers,” said Justinn Overton, Executive Director of Coosa Riverkeeper. “It is clear from Alabama Power’s and Power South’s own groundwater monitoring data that toxic pollution in every unlined coal ash pit in Alabama is seeping into nearby groundwater and rivers and that impacts wildlife, fishing, and human health.” 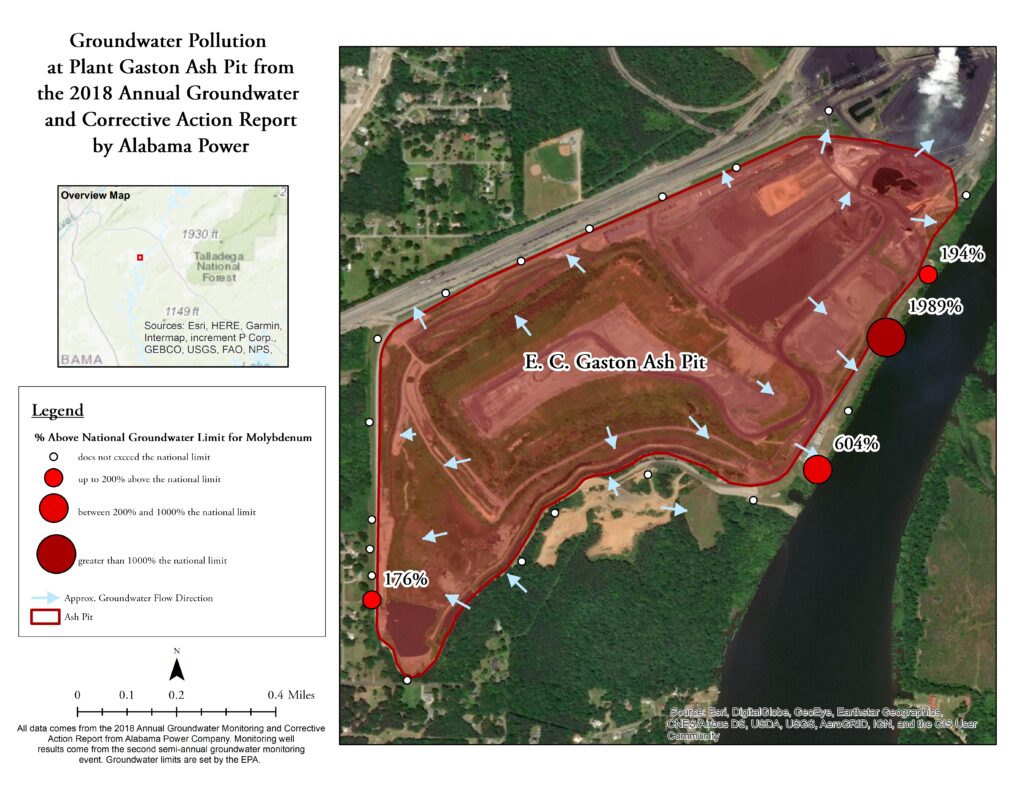 The maps come on the heels of a new report showing that Alabama Power’s only capped-in-place pit at Plant Gadsden is still leaking arsenic and radium into groundwater above national limits. The utility plans to use the same method at every unlined ash dump in the state. The Alabama Department of Environmental Management (ADEM) recently gave Alabama Power the maximum fine of $250,000 (less than 0.03% of the utility’s 2017 profit) for the Gadsden violations. Meanwhile, utilities across the Southeast like Georgia Power, Duke Energy, Santee Cooper, Dominion Energy, and TVA are collectively moving nearly 250 million tons of coal ash to upland, lined landfills to protect citizens in their states.

The data underlying these maps comes from Alabama Power’s and Power South’s own groundwater monitoring reports. The reports show that groundwater violations have occurred at every one of the six pits slated for closure. In the reports the utilities take samples from multiple wells along the edges of the ash pit. The samples at each well are then statistically manipulated to come up with a confidence interval (or range) of how much of a pollutant is in the groundwater at that site. Only when the upper AND lower value for that range are above the regulatory limit the utility is determined to be in violation. These maps show the average value from that range only where both the lower and upper end of the range are above regulatory limits.

These violations have resulted in $1,855,000 in fines for the utilities, but they have simply paid the fines and made no plans to stop the pollution. The utility’s own reports also show groundwater levels are frequently higher than the level of the ash in the pit and flowing towards the Coosa River and her lakes. Alabama Power’s data showed that one of the 18 monitoring wells at the Gadsden site on Lake Neely Henry contained more arsenic than allowed on eight dates between December 2017 and February 2019. The highest levels recorded were 1.01 mg/L of arsenic, which occurred on two dates in 2018. The maximum contaminant level set by the Environmental Protection Agency is 0.01 mg/L. In other words, Gadsden Steam Plant’s coal ash pond is currently leaking arsenic – 10,000% higher than the limit – and radium into our groundwater. At the Gaston steam plant site Radium, Molybdenum, Lithium, and Arsenic were all above the national limit at times during the utilities monitoring.

According to Overton, the data itself shows why the Gaston Steam Plant coal ash pit cannot be capped in place. “Closing an unlined pit of toxic coal ash within several hundred feet of a major river is irresponsible when Alabama Power’s own data clearly shows that the ash is in groundwater. ADEM and Alabama Power must learn from their mistakes at Plant Gadsden,” Overton says. “The only solution that will guarantee the health of our communities, economy, and environment is to dig up and move coal ash to an upland, lined landfill away from places where families swim, fish, and boat as well as rely on that surface water for their drinking water.” Coosa Riverkeeper is urging citizens to contact Alabama Power with your concerns and learn more about this issue.

Wait, what? Here's the Background...

Coal ash is the toxic waste that remains after coal is burned. It contains high concentrations of heavy metals, including mercury, arsenic, selenium, and chromium, which are hazardous to human health, wildlife, and waterways.

In November 2016, to comply with federal regulations, Alabama Power announced its preliminary closure plans to “cap-in-place” the coal ash at Gaston Steam Plant on Lay Lake. This decision contrasts with the decisions made by many other utilities in the Southeast who instead chose to excavate their coal ash and move it to lined landfills away from waterways.

We made this video in 2012 but
the message is still relevant...