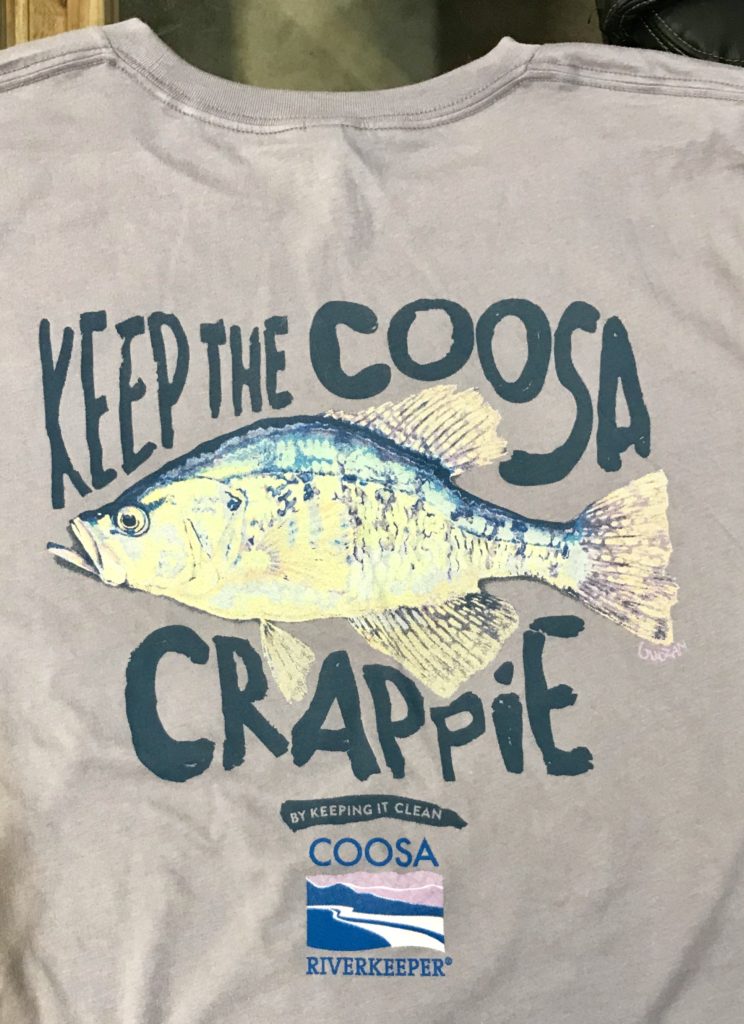 Our new crappie shirts are available in our store

With our latest Richie Gudzan game fish shirts featuring the white crappie, there’s no better time to talk about the health of the Coosa River crappie population and learn a few things about their life cycle that may help you to catch more. Before we go on, you can catch the new crappie shirt over in our shop while they’re fresh.

I recently attended a meeting where we invited Mike Holley down to Clanton to explain to the fishermen in our Lake Mitchell Home Owners Boat Owners Association why our crappie catch numbers are down. Mike is the Supervisor for District 2 of the ADCNR Fisheries Department, meaning he oversees most of the management of the fisheries on the Coosa lakes.

Mike explained to us that, statewide, 2010 was a bumper year for crappie spawning. In a sampling in spring 2017 on Mitchell, nearly 85% of the crappie they collected were from the 2010 “age class” (born in 2010). This means most of the crappie in the lake are older and larger, and more importantly, feed like larger fish. Many fishermen don’t realize their lure choice targets primarily smaller crappie.

How can you use this information to catch more fish?

When crappie get larger, around about 12″ or so according to Mike, they switch to feeding largely on shad. They won’t be found so much in structure biting on jigs and grubs – which is where and how most fishermen target crappie. Instead, larger crappie will be in the channels feeding on shad. Knowing that on the Coosa right now a lot of the crappie are older and larger, fishing with live shad in the channels is likely to yield better results in quantity and quality.

The chart at right shows just how large that 2010 age class is on Mitchell right now – nearly 85% of the population! The age class distribution charts for other lakes on the Coosa are similar, and we’ve included those charts at the very bottom of this post. To summarize, that 2010 age class of crappie makes up:

Of note, ADCNR data shows that in all the lakes on the Coosa, crappie are living long lives, well past maturity where they can spawn (which occurs when they reach around 8″). If crappie were being overfished, we’d see very few living past 3 years of age. But, with so many older black crappie being seen in the Coosa, harvesting of the black crappie populations on the lakes could be increased without harming the health of the species. So, like our shirt says, “Keep the Coosa Crappie.” But before you do, remember to check for fish consumption advisories on our Fish Guide, because there are some advisories for crappie on Weiss Lake.

The Coosa has both black and white crappie. You can learn more about the differences in our Game Fish Guide. Something Mike noted anecdotally is that black crappie make up an increasingly larger portion of the crappie that ADCNR shocks up. Black crappie prefer clearer water than white crappie, and the Coosa River’s improving water quality over the decades could be a factor as to why the lakes are more suited to black crappie than white crappie. That’s certainly a good thing, even if it seems concerning on the surface.

Impact of Length Limits and Other Fishing Restrictions 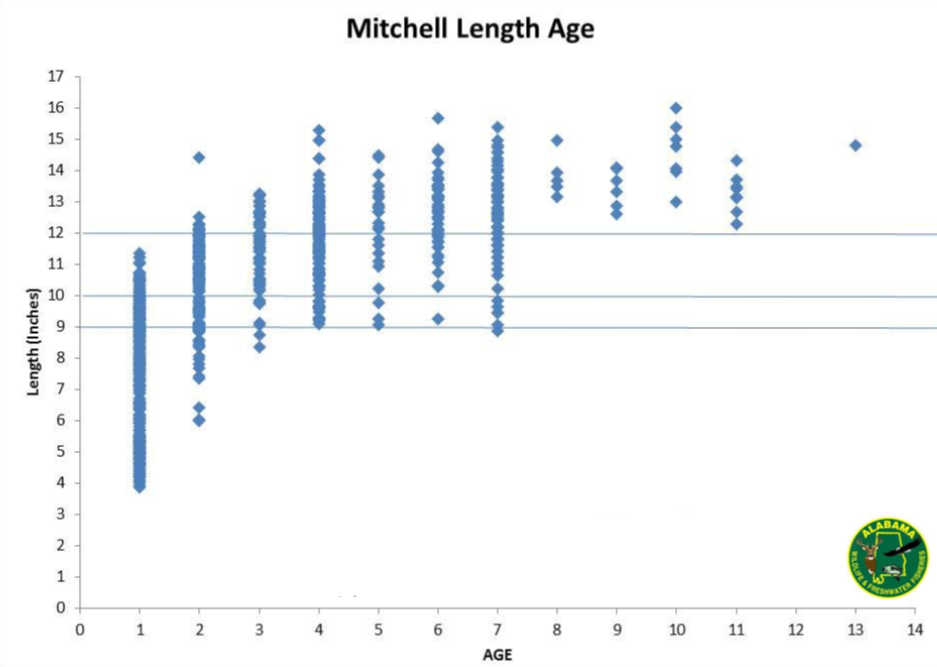 It’s illegal to keep a crappie shorter than 9″ on all of the Coosa lakes except Weiss, where the size limit is 10″.  As the chart to the right for Mitchell shows, by age 4, essentially all the crappie collected by ADCNR in a 2017 survey had reached the 9″ limit. However, even some crappie as old as 7 had not reached the 10″ mark. This means, if the limit was 10″ on Mitchell, there would be plenty of mature crappie that had been afforded numerous opportunities to spawn that would be illegal to harvest. Those fish are some of the slowest growing and the ones that anglers should want to harvest the most in order to eliminate the slower growing individuals. As such, a 9″ limit looks spot on for Mitchell.

But what about on Weiss? Comparing these charts, 5 year old crappie on Weiss Lake ranged from about 8-13″ while 5 year old crappie on Mitchell ranged from 9-15″. The mature crappie on Weiss are actually amongst the smallest on the entire Coosa. The data implies that many mature crappie on Weiss never reach 10″.  At the standard 9″ size limit, more of those crappie would be available for keeping. And hardly any crappie under 3 years of age would be harvested if the size limit was lowered to 9″.  In other words, old, slow growing crappie are being left in Weiss Lake when actually it would be ideal to harvest them. The fishery would be better served to remove these fish to free up space and food for younger fish with potential to reach longer lengths. The 10″ limit protects the smallest, least desirable fish, and over the long term only results in a population of crappie that tends to be smaller. That’s what the data shows and that’s the consequence of the 10″ size limit on Weiss Lake that was requested by locals back in the 1990s. Perhaps it’s time for a change? 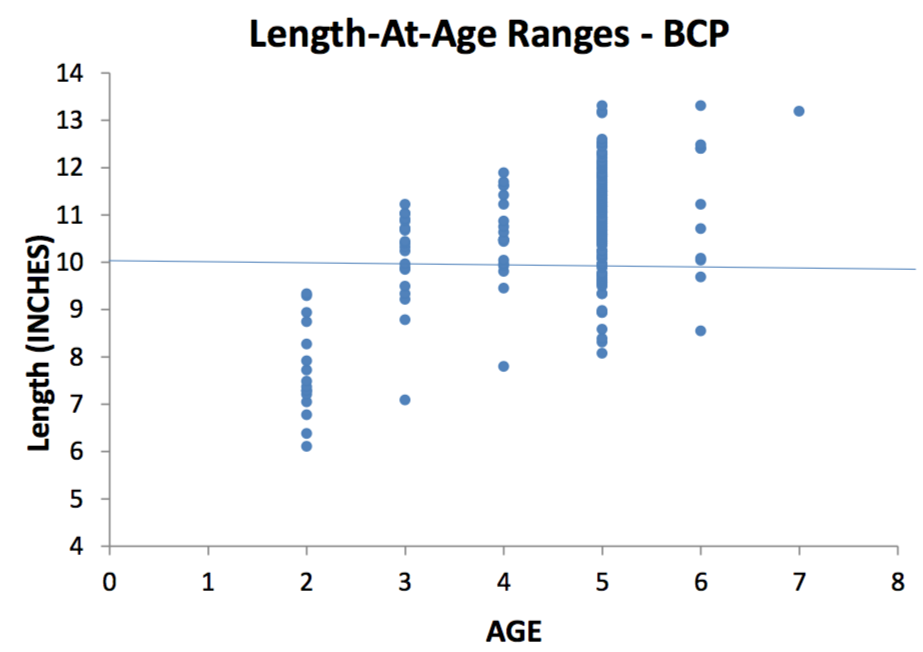 The Difference Between Shock Surveys & Your Catch

ADCNR does these surveys using electrofishing, shocking fish up to the surface to measure and age them. But, they also do creel surveys where the stop fishermen at boat ramps and ask to measure and age their catch. What’s interesting is that electrofishing brings in longer crappie than what fishermen are actually catching, as seen in the chart below. There could be a couple factors at play here, but certainly one is that many fishermen are targeting crappie on structure and are not catching the larger size crappie that are frequently feeding on shad in the channel. 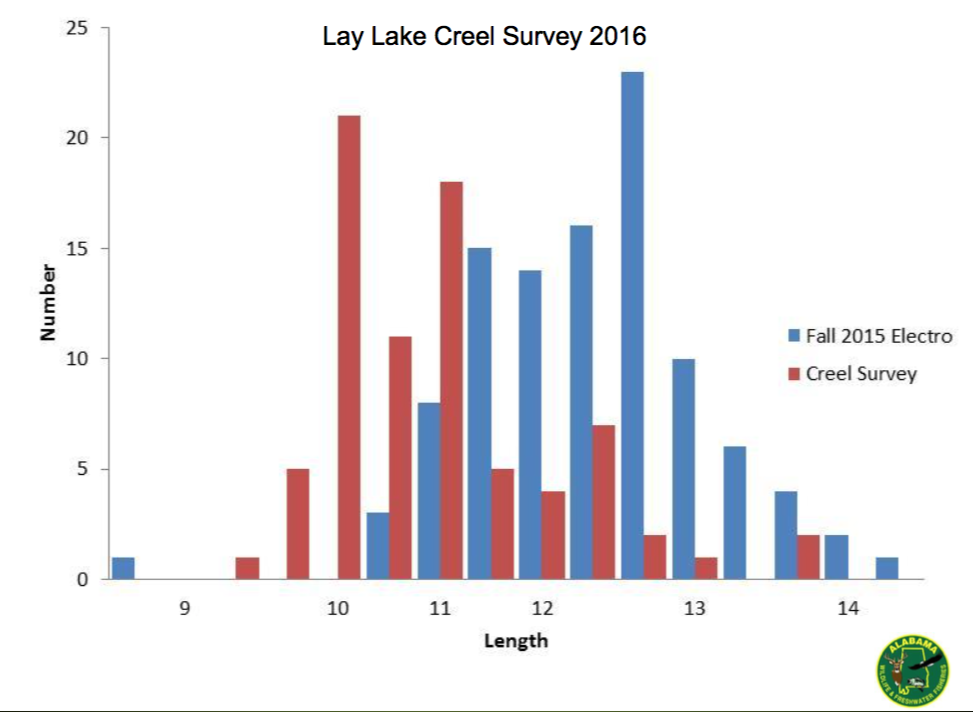 Below are some recent crappie survey charts from other lakes, as promised.